Exhaustion has won the emotional battle tonight. An entire world away, in New Hampshire this morning, my son and I lugged 4 suitcases, 3 backpacks, a box of school books, a large bag, and a guitar through the airport only to find that 3 of the suitcases were a few pounds over the limit. To avoid exorbitant fees, we opened up all of our luggage and reorganized on the airport floor. Once we’d redistributed the weight, the Delta desk worker then asked to see my work visa.

“You don’t have one?” she replied in a voice that indicated no emotion, but she scurried away and talked to her coworkers in a hushed voice, picked up a phone, and then came back to me. I knew this was no good.  “I’m not going to be able to let you onto the plane without a Visa,” she explained. “Your return airfare is for June in 10 months, but if you are staying for longer than 90 days, a work visa is required.” She turned to a co-worker and asked him to go retrieve my luggage from the tarmac.

After going back and forth while the clock ticked closer to departure, it became clear that my options were  A) not board the plane or B) buy two (refundable) return airfare tickets for 89 days from today.  $2,000 that I didn’t have later, my son and I were making a mad sprint to security, where the baseballs he had packed came up as suspicious. “We’re flying internationally and they’re holding the plane for us,” I explained to the security guard. He intentionally slowed down. “Yes, well that’s too bad, isn’t it?” he drawled. “Because we don’t rush through things in security.”

The rest of the travel was uneventful, besides us just being overly tired and uncomfortable, but culture shock hit hard when we landed in San Jose. After waiting behind three heavily-tattooed girls who talked about how Adderall is their choice of drug to increase productivity, in a customs line that stretched out the door, we faced down customs. Our hearts pounded that they would ask why we were there–and how I intended to teach for 10 months if I now had October airfare. We had lied on the form that we hadn’t touched any livestock recently, when we had both fed the farm animals yesterday, and images of being denied access consumed us. We lost one of the customs forms and a grumpy man shoved a new one at me and motioned for us to get out of line before getting back on his phone. “Do you have a pen?” I asked him. My bags had already gone through the sensors that detect any animal products being brought into the country. He stared at me blankly. “No,” he replied. Around me people swarmed unsympathetically.

Once through security, we emerged into a sea of hundreds of tour guides, families, drivers, and cabbies holding signs, yelling out, waving. At least twenty cab drivers asked us if we needed a ride.  I just kept smiling and saying, “No, gracias,” as we helplessly scanned the crowd that stretched out onto the sidewalk and down the street for Franck, our landlord who said he would be wearing a black shirt, holding a balloon. A man came up to us and asked where we were trying to go. “Somebody is picking us up,” I said, hoping to shun him. “Do you have a phone number? I’ll call him,” he offered. I dug out Franck’s phone number. They connected over the phone, and we saw Franck, 100 yards down the road, wearing a brown shirt, wave a yellow balloon at us. The man helping us steered our luggage cart down the road and loaded up Franck’s car, making gentle and easy conversation with us. “Who is this man?” Elliot asked. I shrugged. I knew he was working for a tip, and I had no money with me.

The two of us and all of our bags piled into Franck’s 1990s silver Peugeot with torn seats and windows that don’t roll down. He talked the entire ride about what to do, what not to do, how to be, how not to be, etc. He is a large, friendly, warm giant of a man who drove through stop signs, smoked cigarettes, and eventually talked us through our first Costa Rican store–Walmart.

Costa Rican Walmart should get its own chaotic post someday. While it was necessary to get some supplies, SIM cards for our phones, and something for dinner and breakfast, the experience overwhelmed us. Not knowing the language, the conversion rate, the brands, the store setup, or really anything, we meandered blindly through. “No no no,” Franck would say when we picked up a product. “That’s not the cheap stuff.” I would pick up fruit and he would say, “If that is 2450 colóns, how many US dollars is that? That is an hour’s worth of labor for many people. Look at this. It is half that price.”

Eventually, after driving through back country roads, past gated houses, bike riders, friends arm in arm under umbrellas, and a horse just hanging out by the road, we came to our new home in Atenas. It is stark–we have a few plates, one bowl, a small refrigerator, and a propane stovetop. There is no hot water or oven and one of the beds is in the living area. Our lights are single bulbs, hanging from the ceiling. But the setting is beautiful–we have a large, private front yard filled with vines and banyan trees.

We cooked some spaghetti and ate outside. “This sauce tastes like spaghettios,” I said with a full mouth. Elliot nodded. “It’s good. It reminds me of being American.” I think we need that, because we have no idea where we are, how to get to where we need to be, or what our days will look like. As much as we have traveled, we have never felt so utterly immersed in the unknown. Feeling a little Chef-Boyardee-American does taste good.

On our kitchen counter is a dead butterfly.

Later in the evening, before dark, Franck showed up with an armful of starfruit and limes that he had just picked for us and a candle in a globe holder with another dead butterfly dipped in wax and stuck on the side. “I meant to make you one of these earlier with the one in there, but I’ll give you this one instead.” He smiled at me as though this kind gesture meant something bigger and I realized how foreign I was.

The rain is steadily tapping out a steady pattern on the tin roof that overhangs our little patio. I just swept out a piece of starfruit peel I accidentally dropped on the floor and didn’t notice earlier. It was swarming with an army of tiny red ants. Lizards are scurrying around in the rafters. Strange-to-me insects fill the air with their buzzing. Next door, a dog barks. 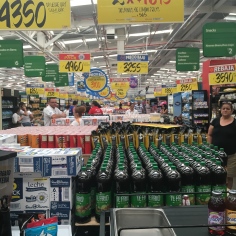 This is overwhelming to me in English, let alone Spanish!

Franck guiding us through. 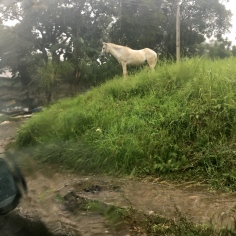 A horse. We argued over whether it was a statue or not–but I saw it move.

Dinner on the patio.

Elliot and I look at each other, neither of us willing to confess that we are both desperately homesick tonight. We look at the dead butterfly dipped in wax and laugh. Everything in our hearts hurts a little bit tonight and we don’t understand our new world, but in its own strange way, the butterfly reminds us that that’s okay. It is terrible and beautiful and means something we don’t understand yet. Just like this journey.

7 thoughts on “Dead Butterflies Dipped in Wax (Or: It Hurts But Will Be Okay)”